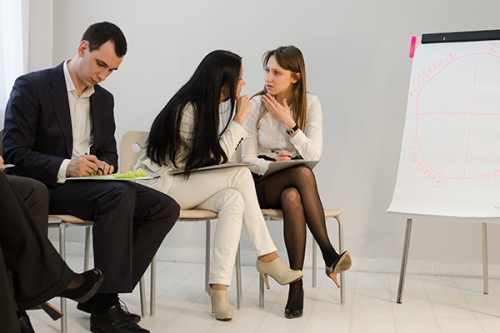 Formation of meaning in socio-psychological research of organizational culture.

Modern organizational and cultural psychology aims to find wholistic solution ofthe practical problems it is facing. It is based on the belief that “no full-bodiedsocio-psychological research can claim to be authentic if it ignores characteristicsof a person, that make him/her human, e.g. their ethical characterstics».

We have all reasons to believe taht organizational psychology is a liberal arts science and its goal is to study human beings in thir spiritual, cultural, social, and historical dimensions. This goal shows the necessity of developing ethicalmethodology of human cognition, where human is viewed as a participant of social interaction.

A tendency of taking into consideration the ethical component of culture isconditioned by the practical necessity of adjusting the interests of different participants of social interaction. Organizations that lack ethical forms of socialinteraction cannot be effective in the long term. “An ethical person does not fight with other people for existence. He helps himself and others to become and remaina human being, and maybe is striving for the better”, therefore, ethics acts as a “principle and law of human groups’ and personality’s functioning».

Development of ethical methodology in socio-psychological research oforganizational culture is necessary. It is proved in V.A. Lefebvre's works. In hisresearch Lefebvre comes to a conclusion that the reasons for conflicts that areshaking the world are for the most part of a moral kind, not economic. In his book“Algebra of Conscience” Lefebvre concludes that “moral knowledge is one of the ancient mentalities of a human. We can even suppose, that emergence of moral knowledge, based on diffentiation between the good and the evil adumbrates the emergence of the human kind». Lefebvre’s views of nature are very close to philosophical views of P. Kozlowski.

According to Kozlowski, the procedure of evaluation of the internal mechanism of ethics can be classified according to “good”-“bad” criterion. The evaluationprocedure consists of comparing components of human activity with a certain standard of maximum perfection or “the good”. Evaluation procedures of thinking, that allow to distinguish between the two poles of the “good” and the “bad”  are based on the concept of meaning. We can assume that meaning is the source ofethical beliefs.

Definition of the term “meaning” is not complete in psychological research/ Modern science that is determined by postmodernism presupposes a number of interpretations of the term “meaning”. Among theories that take into consideration the ethical aspect of meaning, we can single out Carl Gustav Jung's analytical psychology and Viktor Frankl's logotherapy.

K. Jung defines meaning as “quality assigned to something and making it valuable”. Frankl in his book “Man's search for meaning” defines the meaning as “something that we project on the things around us, which are neutral by themselves”. Analysis of these approaches brings us to the conclusion that meaning is localized in the unconscious part of the psyche. The source of meaning is the archetypal image of God (according to Jung), meaning is integrated with conscience in the unconscious (according to Frankl).   Conscience, according to Frankl, “supervises a person in his search for meaning, and can be defined as intuitive ability of a person to find meaning”.

V.N. Panferov views the problem of meaning within the framework of functional context of mental activity. V.N. Panferev singles out explicit functions of psyche (communicative, informative, cognitive, emotive, connotative, and creative) and implicit functions (gnostic, affective, regulatory). Meaning is allocated within the framework of analysis of psyche's explicit functions and is determined by human needs. “The tool of contact and sign activity” is formed on the level of communicative functions, and this process is also determined by human needs.  The problem of meaning as a sign-content problem can be discovered on the level of information functions. Meaning becomes thematised on the level of cognitive functions.  Meaning empowering process appears as a consequence of apperceptive properties of mental reflection. It is a special quality of cognitive activity. «…Informative meaning of a subject includes the personal meaning of the subject in its cognitive activity». V.N. Panferov believes that “individual stylistics of a person, as subject of cognition” is formed because of the meaning, which a person brings into images of his/her ideas, thinking, and imagination. Meaning creates the inner subjective knowledge of cognitive activity in the form of its ways, methods, and technologies”. Socio-psychological aspect of cognition is seen by Panferov as an attempt made by people to learn more about each other. It happens as a consequence of forming self-image and images of one's partners. Panferov believes that “self-respect” is closely connected with self-image, therefore self-image is closely connected with ethics. “Human dignity is determined by his/her moral cleanness, in the case of social disaster a person finds meaning (essence) in finding out that he/she has certain moral qualities. In other words, meaning of life and human dignity cannot be lost unless the ethics is lost”.

On the emotive functions' level, meaning and need act as regulators of the object's subjective value. Panferov points out that at this level the subject's value can change its connotation: “problem of meaning is connected with understanding of a fact that a person needs a certain object, while the problem of connotation is connected with the psychological result of subjective interpretation of this meaning”, where “under the influence of meaningful need the primary emotion is transformed into a special subjective attitude”. At the level of connotative functions meaning can “be discovered in the structure of subjective kind, as a meaning of mental activity”. At the level of creative functions, meaning is integrated into personality, which is seen as a result of all mental functions mentioned above.

In his research Leaontiev talks about an opportunity of managing meaningful dynamics of other people and oneself. This management is called “technology of meaning”. It can be performed by means of three groups of devices: 1. change of the sources of meaning; 2. change of their psychological characteristics; 3. change of structure of the alternatives and implementation of choice.

Culture can be introduced as the widest system of meanings, as storage of collective meanings and values. Culture regulates joint activity and personal interaction. Leontiev singles out three parts of the person-culture interaction process: introduction of individual meaningful contents (positing of meaning), forms of existence and storage of meanings in culture (artefacts, systems of signs, models of behavior), learning meanings from culture (transmission of meaning through behaviour models, meaningful determination of behavior, necessity of existential co-participation in meaning).  It is necessary to note here, that the problem ofmeaning transmission can be solved with the help of a myth, which is a field of cultural meanings and cultural memory.

Therefore, organizational culture as a part of the cultural context is determined by cultural norms and values. Organizational culture forms its own meaningful basis “because it is not only people that can produce meanings, but any change in economy, and organization's activity performed through people, that produce meanings. Any psychotherapy in the long run works with formation and transformation of meaning”.

Modern organizational psychology can be defined as psychology that is centered on culture and its ethical aim, which presupposes responsibility for help and “cooperation in the area o spiritual-psychological self-transformation of a person, organization, societies, and global society on the whole”. It becomes possible as a result of learning meanings of generation mechanisms, which can change individual and inter-individual meanings.